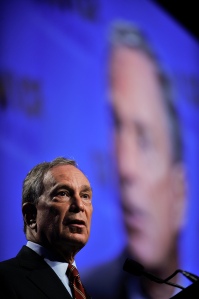 New York City mayor Michael Bloomberg stated Thursday that the current immigration policy in regards to STEM immigrants is “national suicide”. STEM stands for science, technology, engineering and math, fields of study that the United States currently is far behind in developing and Americans tend not to focus on. Mayor Bloomberg has recently been developing and creating schools and programs that focus on STEM fields in New York City. Mayor Bloomberg is attempting to make New York City the leading digital city in the nation.

Amid our less than astonishing current economic state, and low ranking in technology and science, Bloomberg believes it is time that the U.S. government focuses on developing STEM programs. Along with this Bloomberg believes that the United States government needs to change its immigration policy to allow foreign students who come to the United States with student visas for STEM education to extend their visas so they can work in the United States after finishing school. According to Bloomberg and many others, financing education for foreign students but not allowing them to apply their knowledge to the U.S. workforce is a step backwards. Why educate people and then not allow them to stay and contribute to our economy?

The United States is more progressive and advanced than many nations but in regards to the STEM fields, the U.S. is far behind many. In order to secure our future and global competiveness, the U.S. must change its immigration policy to allow those who we educate to give back what they have learned and live out their full potential in the United States. Immigrants have always contributed greatly to the United States, especially its economy. Why stop this for those working in STEM fields?

Many people argue the same thing in regards to undocumented youth in the U.S. The United States requires that students go to school and publicly funds education for all youth, no matter their legal status. An argument for the DREAM ACT is that because the U.S. government and taxpayers fund education for undocumented youth we should allow them to achieve higher education. This would allow the talent not to go to waste and students could thus reach their full potential and contribute more fully to the U.S. economy,

Mayor Bloomberg has a good point, in regards to the STEM fields and our current economic situation. One way to pull out of this economic recession would be to increase those working in STEM fields. The careers associated with STEMS fields tend to be job creators, something for which the U.S. is desperate. Let us hope that Obama and his administration listen to Mayor Bloomberg and realize that the future of our nation rests partly in the development and success of the STEM fields.