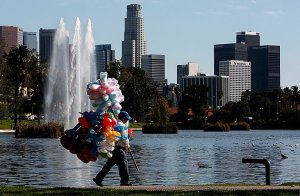 In September, an injunction was granted for Echo Park in Los Angeles to target 6 gangs. Community members of this neighborhood (one that has lately been hit hard by the effects of gentrification) have had their guard up in recent times and see this injunction as a particular threat to them and suspect it to be a tool for further gentrification.

Here’s the basis for their suspicion:

1. This has happened before.

The City of Los Angeles has historically used injunctions aggressively to make areas nicer for the wealthy, rather than for freeing established communities from the burdens of gang presence. Two examples are the 18th Street Injunction in Pico Union (which was conveniently granted right after the Staples Center was built in the area), and L.A.’s very first injunction in 1987 which took place in a small low-income community located by Culver City and Beverly Hills. Why were these places chosen for injunctions despite the fact that other areas needed them more? This might say something about why this current injunction is placed in Echo Park, an area very in-demand by wealthy newcomers.

Going off of my previous point, the designation of gang injunctions seems to coincide more with rising property values than rising crime. The crime rates in Echo Park right now show that the area is much safer than it was 10 or 20 years ago, and and overall crime has dropped since 2011 with violent crimes down 17%, property crimes down 4%, and shootings down 42%. Locals argue that if the city really cared about keeping the community safe, it would have issued the injunction sometime in the 90s. So why is it deciding to do it now? It seems like there may be other motives involved…

3. Injunctions disproportionately affect the working class and people of color.

An important question residents of Echo Park are asking is how the LAPD expects to target only people who are “gang affiliated.” To residents, it seems that any set of vague laws that invasively targets people of a certain race and class will affect the whole community. For example, with increased police presence, street vendors have had to stop business, there is a heightened fear of police and hesitancy to call 911, and youth have had to change the way they dress and how they act as to avoid being profiled. When a whole racial community feels threatened like this, and begins to experience an increase in arrest and incarceration for smaller crimes, it suggests that perhaps moves are being made to clear out that population.

4. Injunctions don’t really make the area safer for the people already living there.

One might drive through a recently gentrified area and say something like “Oh, look how nice! They got a Whole Foods, and taco trucks with English menus, and cool art galleries, this is wonderful!” The thing is, whom is it really wonderful for? For the people who can’t afford $6/lb bell peppers, who would rather not order their tacos in English, and who can’t afford rent in the new “hip” place to live? It’s the same sort of deal with the injunctions. Who really feels safer with more cop cars and helicopters? Undocumented mothers? Day laborers? Youth of color? Who is safer now that the gang activity is pushed outside the safety zone to areas where the working class families will later be forced to move to?

5. “If there were a toolbox of ways the police could fight gangs, an injunction would be the sledgehammer (LA Times).”

Lastly, I would like to say that there are many ways to tackle gang problems and an injunction should be seen as more of a last resort method. Echo Park is an area with a thriving sense of community, a place where the City’s money would be better spent creating alternative pathways for youth, initiating transitional programs for gang members coming home from prison, and funding other programs which would tackle the root of the gang problem. Instead of fueling the school-to-prison cycle of failure for Latin@ youth, instead of selling out a whole neighborhood to the wealthy, the City of L.A. could make real change for the community of Echo Park.