You’ll never guess what’s going down at University of Texas’s West Mall on Wednesday… It’s essentially a game, a game called the “Catch an Illegal Immigrant Game.” If you need to see it to believe it, here is the Facebook event.

Essentially, the Young Conservatives of Texas UT branch has said that it is wanting to “spark a campus-wide discussion about the issue of illegal immigration, and how it affects our everyday lives” through an interactive protest. The rules are as follows:

There will be several people walking around the UT campus with the label “illegal immigrant” on their clothing. Any UT student who catches one of these “illegal immigrants” and brings them back to our table will receive a $25 gift card.

…Once I got over my 5 minutes of initial outrage, I looked at the scenario from a different angle. As you might guess, the Facebook event page has exploded with people arguing, posting, commenting, and going back and forth in heated debate. It seems that already, the YCT has accomplished its goal of sparking a discussion. As I read through the comments, shaking my head (at statements made by both sides of the debate), I thought: “While 99.9% of what is being said here is complete shit (ignorant, racist, ill-informed, offensive, plain wrong!), it is wonderful leverage for the pro human rights opposition to push off of.”

Now hear me out…The question of freedom of speech on college campuses has been an issue for decades, and I think this is the perfect case to examine both sides of the general argument with: Is it wrong for a University to let a student group get away with organizing an event which offensively targets a certain population and could stir up nasty hate speech or actions? Or would it be wrong for the university to put its foot down and stop the conversation before it even sparks? Is there a Middle Way? 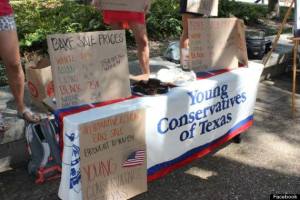 Personally, I think it is a good thing that this discussion has started, however the wall of a Facebook event for a stupid game is certainly not an appropriate places for it to continue. The game is not only offensive, but it doesn’t create any sort of productive dialogue, nor does it offer any place for an educated debate (which we all know is practically impossible on Facebook). All the game is convincing people of is either: 1) that it is fun and acceptable to dehumanize and hate undocumented immigrants just cuz… or 2) that the anti-immigration stance has no logical argument or stance (which it actually does) and the people who support it are just a bunch of racist conservatives who want to round people up and throw them out (which they aren’t).

The sooner the people who side with the YCT calm down and decide to engage in a real debate, the more likely they’ll take a step back and look at the whole issue, then go from there. Likewise, the sooner immigrant activists can start to see logic in the anti-immigration opinion, the faster they can construct strategies to counter such arguments.

For these reasons, I am very glad that the university has issued this statement in response:

“If the members of YCT carry out their plan for ‘Catch an Illegal Immigrant,’ they are willfully ignoring the honor code and contributing to the degradation of our campus culture. And once again, they will have resorted to exercising one of the university’s core values to the detriment of others.”

So what do you think? Now that the university has said that the event may not proceed, was it a good or bad thing that the idea was ever put forth? How should the dialogue continue?

One response to “The “Catch an Illegal Immigrant Game””