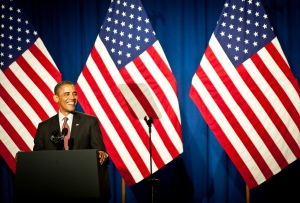 Now that we have officially re-elected Barack Obama as president of the United States, I wanted to take some time to reflect on a post I wrote a couple days before the election, “Breaking Down the Latino Vote.” Statistics show that the overwhelming majority of Latino voters supported Barack Obama. According to a report released by the Pew Research Center, “Latino Voters in the 2012 Election,” exit polls conducted by the Pew Hispanic Center show that 71% of Latinos voted for Obama, while only 27% voted in favor of Mitt Romney. In addition, Latino voters turned out for the election in much higher numbers making up 10% of the electorate, which is an increase from 9% in 2008 and 8% in 2004. According to Eliseo Medina, international secretary-treasurer of the Service Employees International Union, “The sleeping Latino giant is wide-awake and it’s cranky.” This election shows that Latino voters have made their voices heard and attributed to Obama’s re-election in key battleground states, Obama’s policies will benefit the Latino population in the U.S., and we will see a stronger push for comprehensive immigration reform in Obama’s second term

The Pew Hispanic Center shows that Latinos in Florida, Nevada, and Colorado voted strongly in favor of Barack Obama. According to the report, 60% of Latinos voted for Obama in Florida, 75% in Colorado, and 70% in Nevada. In each of these states, the Latino population is growing significantly and this election shows that their voices are going to matter for the future of our country. Julia Preston and Fernanda Santos from the New York Times wrote that in swing states, “Latinos significantly increased their share of total voters, gaining influence that could be decisive in future elections.” Arizona, which has a significant Latino population, still voted largely in favor of Mitt Romney for president, Joe Arpaio for sheriff of Maricopa County, and Republican Jeff Flake in the state’s senate race. Despite the anti-immigrant sentiment that still exists in Arizona and elsewhere in our country, the trends of growing Latino support in key battleground states give us a sense of hope that we can see turn around in the next presidential election as the Latino voice becomes more prominent and significant in determining the future of our nation.

The Pew Report found that the top issue for Latino voters was the economy. According to exit polls, 60% of Latino voters said that the economy was their main priority followed by healthcare (18%), the federal budget deficit (11%) and foreign policy (6%). Obama’s appeal to Latino voters through a policy based approach clearly shows that his policies will address the issues Latinos care the most about and his plan the build up the middle class will directly impact the Latino population in a positive way. Not only do Latino voters seem to align with a more liberal outlook, but exit polls also show that “they felt the Democratic Party seemed to actually care about getting their votes.” This feeling of inclusion was gained by Obama’s continual support for the middle-class and his plans for immigration reform through policies such as the Dream Act, which supports undocumented students. On the other hand, Romney lost the respect for Latino voters early in the election when he described “self-deportation” as a means to solving our country’s immigration issues. Despite his later attempts to appeal to Latino voters, he was never able to overcome this comment and his economic policies failed to align with the needs and desires of the Latino population.

Finally, although exit polls show that it was not the top issue for Latino voters, the discourse surrounding immigration played a significant role in Obama’s ability to gain Latino support. Preston and Santos said, “A crucial piece of Mr. Obama’s winning strategy among Latinos was an initiative he announced in June to grant temporary reprieves from deportation to hundreds of thousands of young immigrants here illegally.” A poll through ImpreMedia and Latino Decisions found that 58% of a group of 5,600 Latino voters were “more enthusiastic” about Obama in wake of his support for reprieves. Another exit poll from ImpreMedia and Latino Decisions found that 60% of Latino voters knew an undocumented immigrant. Clearly, immigration reform matters for the Latino population and Obama’s policies seem to not only benefit Latinos, but also demonstrate a sense of respect for immigrant communities. An article from the Huffington Post “Latino Voters in Election 2012 Sweep Obama to Reelection” states, “If a politician seems to disrespect immigrants or Latinos overall, or if the party seems uninterested in winning their votes, the support isn’t going to come. This year, it didn’t.” Obama and the Democratic Party appear to be more deeply invested in the needs of the Latino community than Romney and the Republicans.  This election was an exciting moment for Latinos and indicates a shift in our country’s demographics and priorities. We are beginning to see more minority groups raise their voices in support of policies and initiatives that support their communities. We can no longer ignore immigrant communities in the United States. As shown in this election, Latinos made their voice heard and will continue to grow in their political presence and drive our country forward in a progressive and positive way.