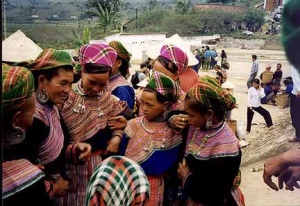 U.S. in regards to immigration has always upheld the idea that assimilation is required for new migrants. Yet what if migrants chose not to entirely adopt ‘American’ ways? The Hmong people, for example, began migrating to the United States with the fall of Saigon and Laos to communist forces in 1975. Throughout this period of militaristic and political displacement they experienced numerous tragedies: loss of family members to US recruitment, having to abandon elderly and valuables so as to avoid Vietnamese military, seeing dead or abandoned children on the sides of roads and having to leave them behind. The Hmong made these sacrifices, gambling on the U.S granting them asylum. Sadly, it wasn’t until numerous filthy refugee camps later, the Hmong were slowly granted entrance to the US. Admissions increased drastically in the 1980s, when about 56000 Hmong refugees were accepted into the US. With this first wave, voluntary settlement agencies attempted to disperse the Hmong around the country to areas such as: Philadelphia, Chicago, Iowa etc. This attempt to assimilate the Hmong failed. In the late 1980s much of the Hmong population gravitated towards one another, establishing residency in areas such as Fresno, Stockton and Merced. Living in the mountains of South Western China isolated the Hmong from other races, enabling to develop and maintain their own very unique culture. Their stubborn mentality has enabled them to be ferocious and respected fighters, as well as maintain a close knit community. The large population of Hmong in Merced, Fresno and Stockton are examples of ethnic enclaves, and proof that full assimilation into the US is both unreasonable and unethical. Merced has 14 Hmong clans: the Cheng, Fang, Hang, Her, Kong, Lee, Lor, Moua, Thao, Vang, Vue, Xiong and Yang. With in their community they preform various traditional rituals (whether in honor of a birth or death), led by a Shaman, and involving animal sacrafises. If the animal is exceptionally costly, neighbors, and cousins put in money to afford the pig or cow meant to appease or distract evil spirits called, dabs. The large Hmong community in Merced enables the Hmong to maintain the practice of inter marrying with other clans. Ethnic enclaves provide diversification in the US, and enable races to preserve cultural practices, and thus also their ethnic identity. It is not just the tenacity of the Hmong in maintaining their social community that disputes theories of assimilation. The Chinatowns, Koreatowns, Little Thailand’s, Little Mexico’s in large industrial cities such as LA, San Francisco, and New York are all examples of enclaves that define and make America what it is today.