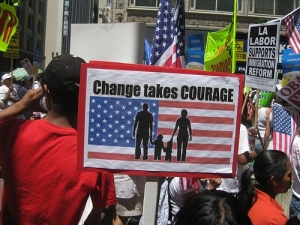 On Thursday, July 5th, the California Senate approved a bill which would limit California’s cooperation in federal government’s immigration enforcement policies. As the Los Angeles Times reports, the Assembly will likely pass the legislation, which will then reach Governor Jerry Brown’s desk.

Before long Obama and Romney will have to stake out a position on this legislation, which has the support of many police chiefs and majors throughout California.