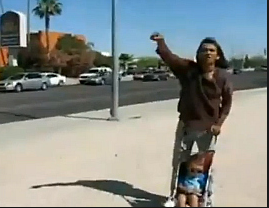 Although many people living in the U.S. like to think of themselves as Americans, we often forget that this land was not the home of our most immediate ancestors. As a nation built by immigrants, how can we truly say that we are Americans if we are not indigenous to the land that we now reside in? In fact, the founders of this nation, and their forefathers obliterated large swaths of the indigenous people who made their homes in what is now called the Americas.

This controversy drew immense media attention during an anti-immigration rally in Tuscon, Arizona. A Native American man told the protesting group that they were all illegals (Huffington Post). Yes, the people at the rally did have U.S. citizenship  to be here, but the man was making a different type of point. The only reason America as an internationally recognized country exists is because the stolen land was taken from natives who knew nothing of where the invaders came from.

The man strikes a nerve with a great deal of the protesters when he criticizes the symbolism behind the American Flag. He points to it and says it “stands for all the Native Americans you killed to plant your houses here.” (ICTMN Staff) Nearly every American alive would probably disagree with that sentiment, but it does raise the question: what do the Native Americans think of America as a whole? Are we an illegitimate government? Do we celebrate our freedom on July 4th without acknowledging that we took away the freedom and the lives of a people who called this land home? Do Native Americans experience sentiment that they are grouped together under the “American” label with most of the population base, the true illegals? The most repulsive offenses may have happened centuries ago, but those battles and lost lives continue to shape and influence the immigration debate that may very well, have no end.

10 responses to “News Flash! Most Americans are illegal.”