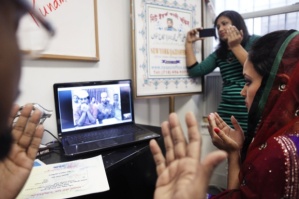 Recently, in some immigrant communities internet marriages have become increasingly popular. Although this new practice of social arrangements between two people who recite their vows through a computer screen may seem a fortuitous alternative for couples in a long-distance relationship, in this case immigrants with a loved one abroad, it also has began to raise some skepticism around the validity of these marriages as these virtual marriages become more frequently arranged.

The technological advances of today have made internet marriages so accessible that it almost makes them acceptable. With the technology available, immigrants residing within the United States take advantage of it in order to meet their emotional and social needs. Technology now allows two people to marry while being on the opposite sides of the globe, what best than utilizing it when immigration policies hamper the possibilities of a traditional marriage or it simply presents a much more affordable alternative for the couple. However, not everyone views this new trend in the same light; in fact, more people are becoming concerned with the new trend.

“The practice is so new that some immigration authorities said they were unaware it was even happening and did not typically provide extra scrutiny to ensure these types of marriages were not misused to secure citizenship. But even those who conduct or arrange these ceremonies have expressed reservations as the practice has grown more widespread”. In fact, “Mazeda A. Uddin, a community activist from Queens, who often plays matchmaker, said she stopped organizing proxy weddings after witnessing people being married and left brokenhearted by unscrupulous foreigners seeking a green card, not a life partner”.

This emerging internet-marriage trend within some immigrant communities, I predict, will transform immigration policies eventually regarding marriage-based immigration cases in the United States. New policies that better regulate the validity of marriages will be implemented on such cases. These new regulations by the U.S. Citizenship and Immigration Services (USCIS) may help prevent illegitimate instances such as marriage fraud, misuse of marriage to secure citizenship, and deception of women in trafficking networks. However, this new trend could present a major threat for the country and in result these regulations by the USCIS may be so extremist that they could violate the rights of immigrants in regards of marriage. In comparison to other people residing within the U.S., marriage for them will be a much more difficult task to achieve. To what extent should regulations around immigrants’ marriages be considered a violation of rights? Or would any measures taken by the USCIS be accepted and trusted no matter what, considering that they are necessary for the nation’s safety?

One response to “A new emerging marriage trend could be threatening, but for whom?”