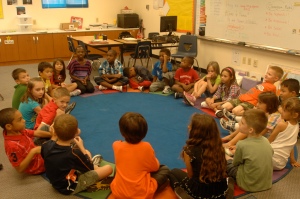 And the children repeated,

I witnessed this scene in the middle school in Los Angeles where I tutor students and I believe this attitude does not deviate much from the norm in many public school classrooms. Indeed, I encountered many immigrant children who blamed their inability to succeed academically on themselves rather than on structural discrimination or family and personal issues beyond their control. In this same classroom, half of the children had different learning abilities that inhibited their ability to focus and sit still, as the teacher required them to do, for prolonged periods of time. The other half, unaware of their peer’s different abilities, were often regarded as slow, unintelligent, and lazy. Even though the classroom set-up and dynamic envisioned a classroom that allowed some students to play the role of a teachers aide, the reality of the structure most often reproduced feelings of inadequacy and low self efficacy amongst those with different learning abilities. Similarly, I observed classrooms that contained English Language Learners who were struggling and failed to receive individual support and personal attention from their teachers. As a result, the students often blamed themselves for their academic trouble. In her study “‘I Can’t Go To College Because I Don’t Have Papers’: Incorporation Patterns of Latino Undocumented Youth,” Leisy Janet Abrego explains how undocumented immigrant youth blamed themselves rather than current immigration policies that prohibit their ability to attend higher education institutions and restrict their social and economic mobility (220).

As a result of such studies and my observations while tutoring in LA’s public middle schools, I came to wonder what could be done and what needed to change so that students could understand that instead of something inherently wrong with them, outside forces beyond their control often governed their ability to perform well in school.

Perhaps, as Suarez-Orozco suggests, schools and teachers need to provide “a more supportive educational context [that] can help protect a student’s well-being” (Suarez-Orozco, et. al., Learning a New Land, 46). Providing counseling, affirmation, and allowing immigrant students and children with different learning abilities to grow in their own space and time without rushing academic learning will help them overcome psychological issues deterring academic involvement and success. Also, as Igoa mentions in The Inner World of the Immigrant Child, teachers in the classroom need the support of school administrators and education policy makers. A teacher can try to change her classroom setting and lesson plans, but high-stake tests and lack of funding for some schools threatens the amount of effective support and nurturing a teacher can provide his or her students. In some instances, such as the one I witnessed, the tests can have adverse effects and instead of encouraging students to challenge themselves academically, the tests discouraged students with different learning abilities or English Language Learners from succeeding academically.

Furthermore, failing to recognize how family structure, socioeconomic status, school violence, and available resources influence academic achievement, current legislation undermines the academic capabilities of immigrant youth. Certainly, education policy needs to shift in order to promote more support, time, and space for immigrant students to grow and succeed, not only our K-12 public school system, but also in rigorous universities and colleges as well as in professional careers. Contrary to popular belief, immigrant students are not failing in our schools; rather, our schools are failing them.